(A bit of background for those who don’t know, I recently went along with the people I babysit for during the week to France for two weeks to help watch the kids. These are the promised pictures from the first week of that trip.)

I know I promised these pictures on Friday, but I was folding mountains of clothes and packing and shopping and then got caught in a cooking frenzy. Saturday I was out and about, and Sunday I did even more cooking. So, here are the promised picture of my trip, a weekend late.

Mind you, this won’t be all of the pictures. The full 110 are posted in this album on my G+ page. Most of them are captioned, but there are a few I know are of landmarks, but I haven’t figured out what landmarks just yet.

Let’s start with the one thing I most wanted to see, which we also happened to see on our first day – Notre Dame: 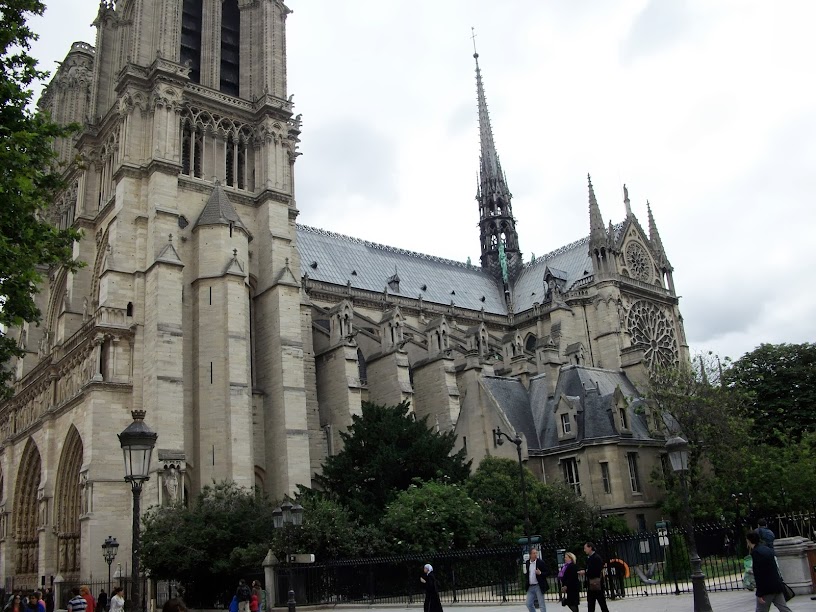 After spending at least a few semesters studying it in pictures, I couldn’t be in France without seeing it in person. It was seriously impressive, and hopefully my pictures do it slightly better justice than the tiny pictures in my textbooks.

I also loved being able to walk down the river. There are so many interesting boats parked along the bank and floating down it at all times. 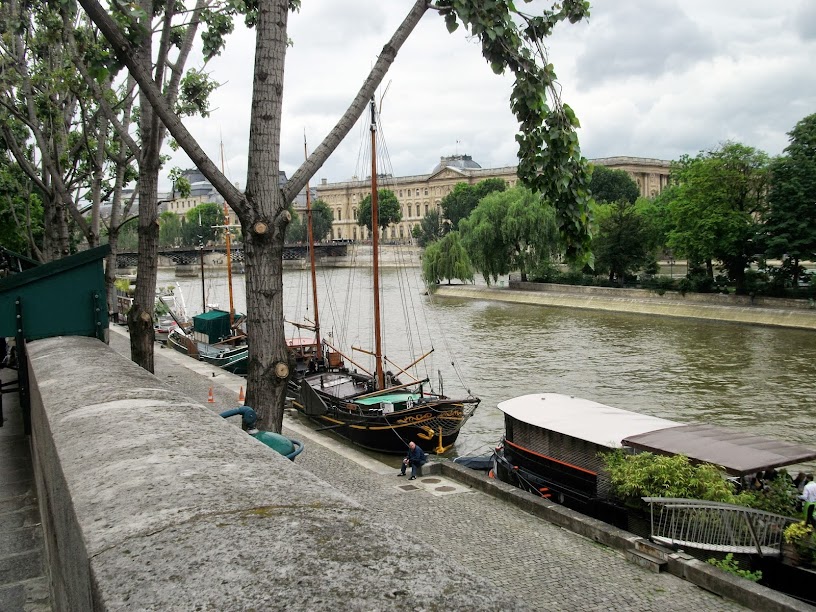 Because the Seine river runs directly through the center of Paris , there are plenty of bridges to take you from one bank to the other and provide great views at the same time. 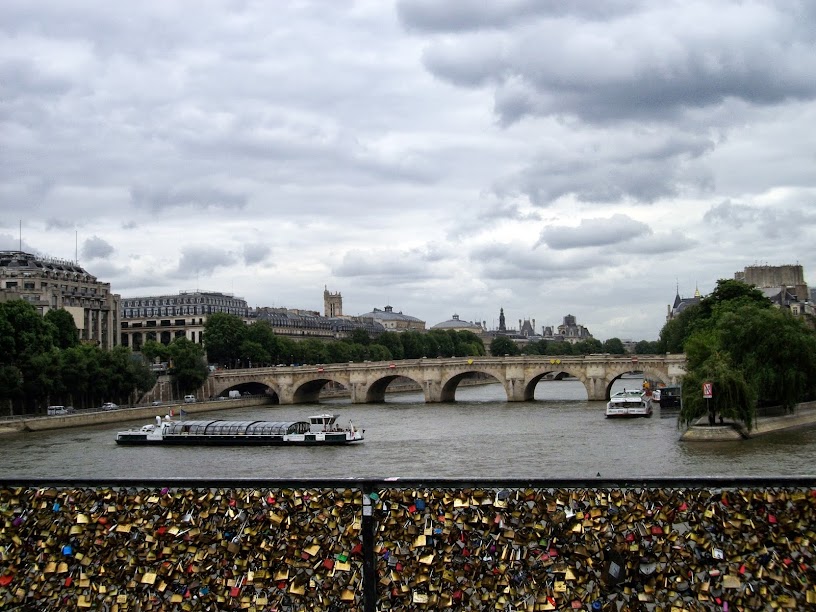 There are a couple bridges with an interesting tradition. Couples and families write their names on locks, lock them to the bridge, and throw the key into the water to symbolize love lasting forever. 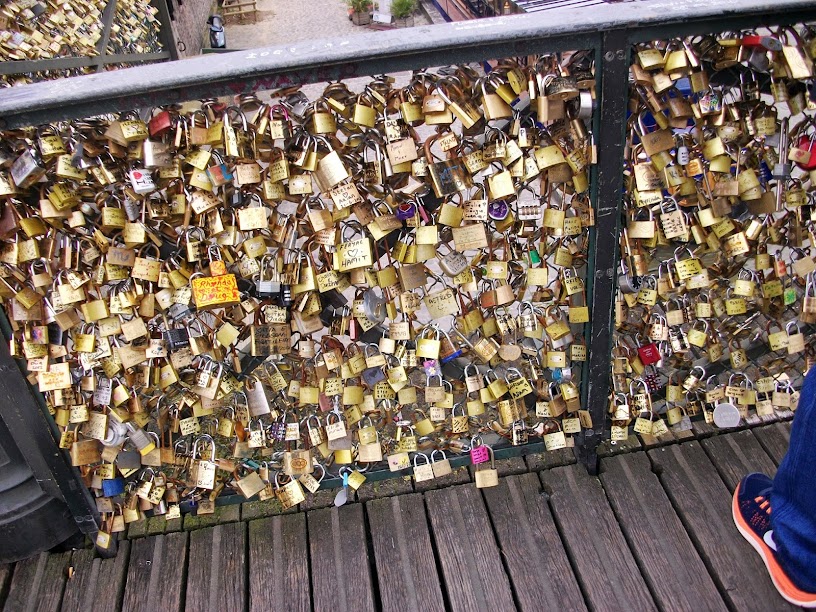 Another thing you must see in Paris? The Louvre, of course, and it is massive. 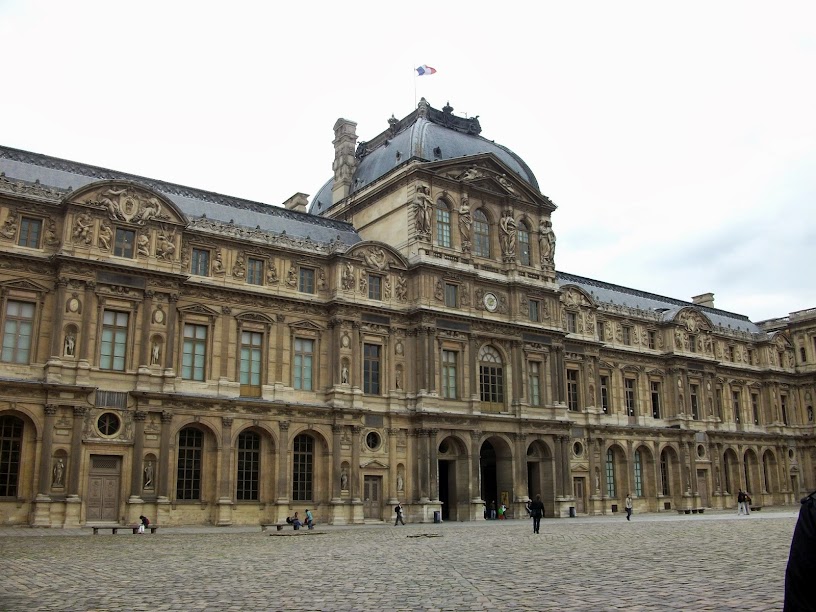 Especially the famous glass pyramids and fountains in the center. 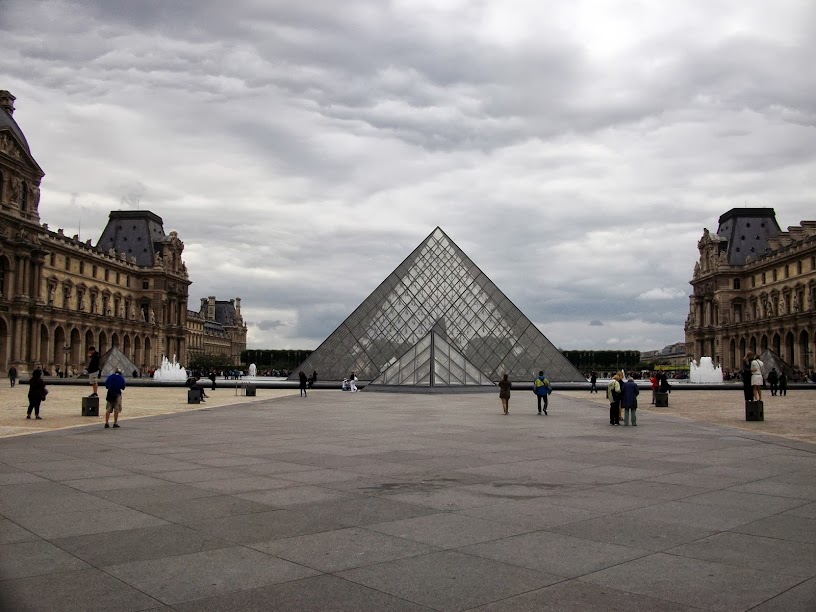 From the Louvre, you can walk straight into the Tuileries Gardens. There are fountains, flowers, trees, and a view directly down the center of the Obelisk and Arc du Triomphe. 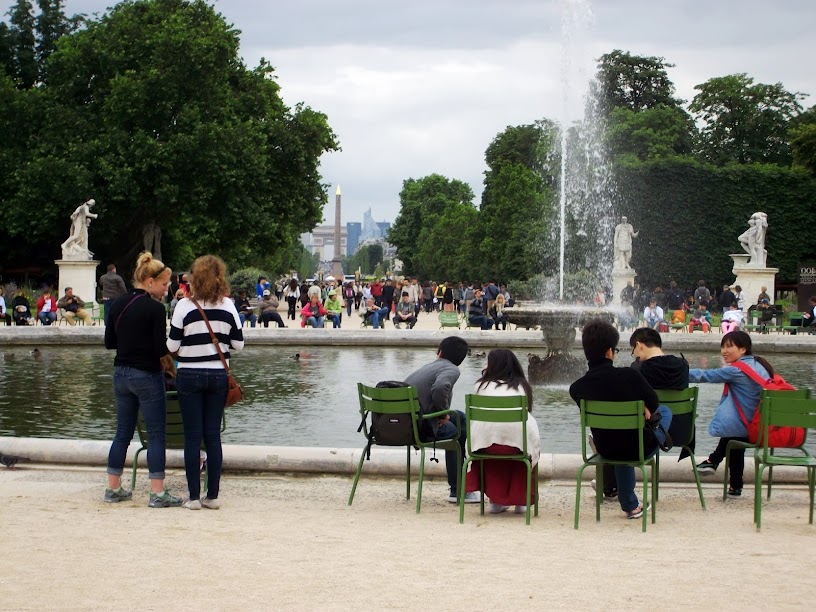 But traveling with kids meant we spent most of our time here: 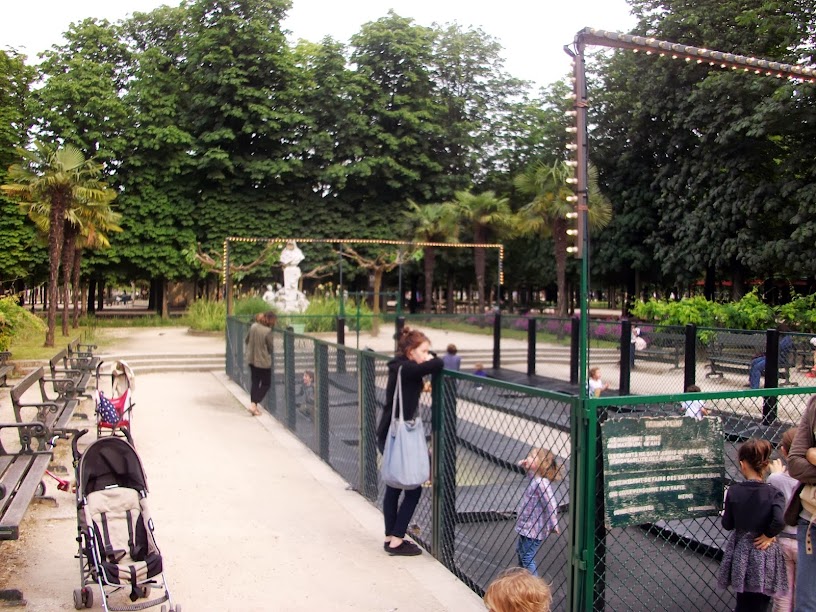 That’s right, there is a park full of trampolines in the middle of the gardens. Pretty awesome idea, really.

Another great park in Paris is the Luxembourg Gardens. I think it was actually larger than the Tuileries. It has a large reflecting pool and statue near the side entrance. 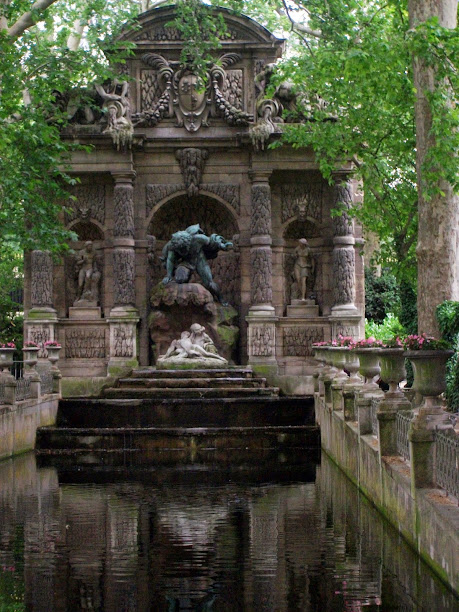 The Pompidou Center was a must-visit. The outside is covered with color-coded pipes… 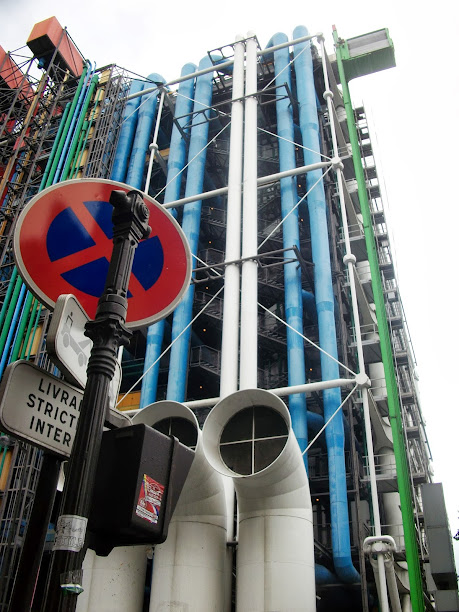 while the inside is a modern art museum. All the exhibits I saw were cool, but I think this one was most impressive. When you see it in person, it doesn’t look like much. Just a net with some reflectors. But when you take a picture, it lights up in your camera display. 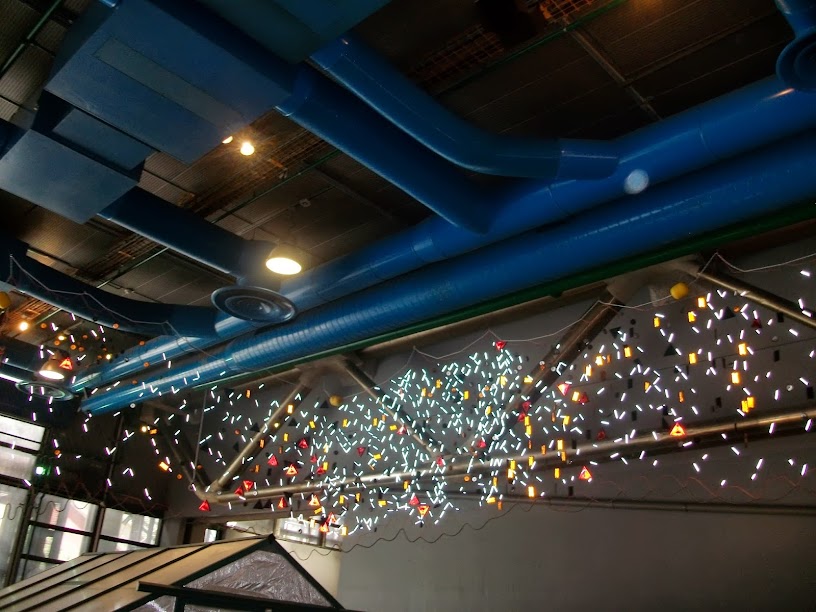 At the top of the Pompidou Center, you can look out and see all of Paris. That’s where I took possibly my best picture of the Eiffel Tower. 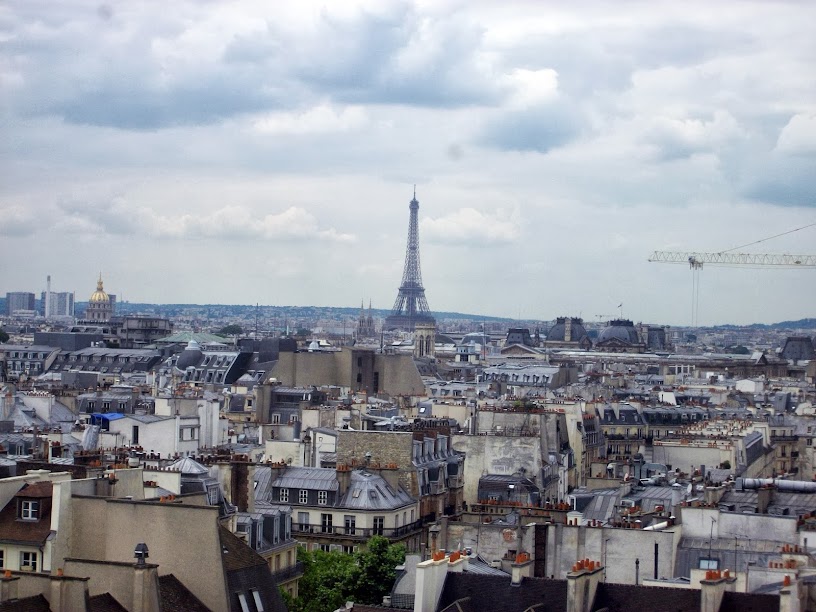 We went to it, but you can’t exactly take a great picture of a giant structure standing at the foot of it.

The baby and I took a walk to the Place du Vosges one day after a particularly long nap (his, not mine). It has some wonderful fountains. 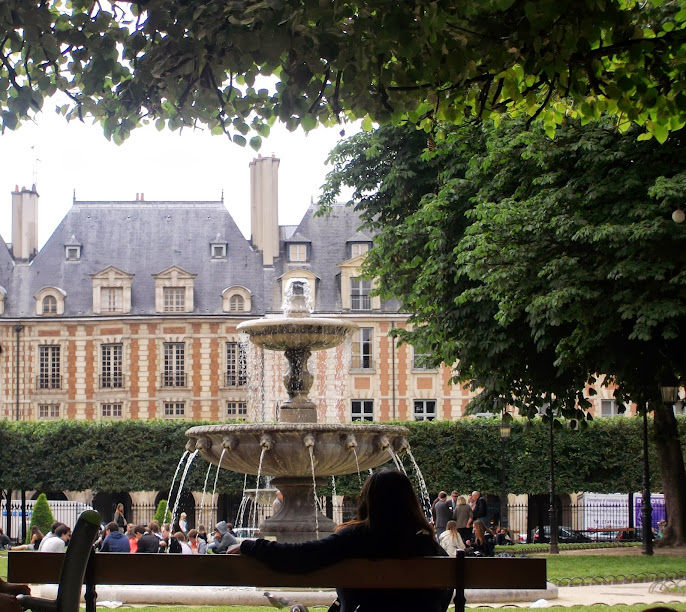 Another day we went with the older kids and their dads on a boat ride down the Seine. on the way we saw the Memorial des Martyrs de la Deportation, a memorial to those who helped the Jewish people escape France in Word War II. 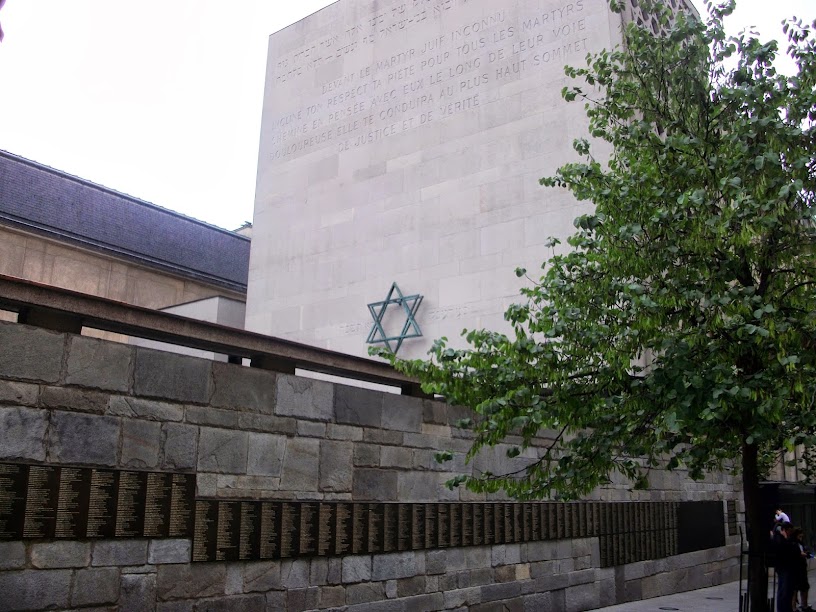 It was really eye opening to see all the names of people who were willing to risk their lives to help their neighbors and friends, and sometimes even strangers.

That pretty much sums up my first week in France. To keep this post from being too incredibly long, I’ll post about the second week on Wednesday. It will be less pictures, but still as interesting.