Remember how I said I was going to knit an entire sweater over the past two weeks? Well, I didn’t. I did manage to get the back of the sweater fully finished, though:

I didn’t end up watching much of the competition because NBC requires that you log in to their website through your cable provider to watch the replays of the events. I was trying to watch online because I don’t have a cable provider, so that didn’t work out so well.

I also had something else sneak its way into my work schedule as well – blankets! Two baby blankets to be exact. One out of a fluffy, bulky yarn:

and the other out of a light, lace yarn:

It doesn’t look like it in the picture, but this one if also going to be a square. It is just gathered on the circular needle right now.

The first one was fairly easy to create. I kept the pattern in my head/made it up as I went. Lace, on the other hand, well…

That took a bit more planning – and paper.

I finally managed to puzzle out a good chart. Well, several charts used together:

I am chugging along at it. I’m hoping to be able to have enough of the yarn left over to make matching hats. Lace yarn really does go a long way.

Ever get sidetracked in the middle of a project by a bigger project? What did you do while watching the Olympics this time around?

To the rescue of the sad little boy who had rubber band Batman number 1 stolen from him. This Batman is based on the Thor action figure tutorial below. I couldn’t find any tutorials on actual Batman, so I came up with this little chart to use along with the other tutorial.

Note:It isn’t mentioned in the chart, but the horizontal bands are singular, not double.

Simple version of the instructions is to start with the arms. Place bands, using 2 at a time except the one that needs 3, from top to bottom, then loop the bands in the opposite direction, placing the 3 bands on the offset top bands. Hold the arms on toothpicks or similar objects, with the top loops grouped separately from the bottom.

Next, place the vertical bands from top to bottom. Put the arms at the shoulders as indicated, then place the single horizontal bands as shown.

Before looping the bands, you are going to first need to extend the legs by wrapping a cap band on the hook, pulling through two (held together) black bands, and two (held together) gray bands as if you were making a single bracelet with the mini-loom. Place this on the bottom peg at one leg and create another for the other side.

Finally, loop all the bands from bottom up, placing all of the top bands (both loops) on the center peg. Pull a single black band through, and loop it through itself into a knot.

To add the eyes, take a single white band, push the hook through the mask area at one side, pull one side of the band through, placing a c-clip on the back side. Weave the band at the front behind the center v and then back through the other side of the head to create two, even eyes. Place the other end of the white band, and the loop created by the last black band, into the c-clip.

To make the cape, make a 6-long by 6-across “triple single”. A good tutorial on the “triple single” can be found on the Rainbow Loom website. To make it 6 across, either use two looms side-by-side, or you can create the regular size, lay the vertical bands for a second one, and stretch the horizontal bands from the first across in the same manner on the second. If you tie off the tops in the same manner as the top of Batman, it gives you two nice loops on either side.you will pull those loops through at the shoulder, loop two single black bands through in a chain, pulling them around to the opposite side of Batman’s head, and secure them in the c-clip. Do that on both sides, and your Batman is complete.

The first time I did it, this took me about 2 hours. Once I got the basic shape down, the second attempt took only about half an hour. So if you are familiar with making action figures on the Rainbow Loom, it is a fairly quick project. If it is your first time, set aside a good bit of time to work on it undistracted.

One would think it would be impossible to forget a holiday that is advertised everywhere for the month and a half leading up to it, but one would be wrong. That is how I found myself desperately making four Valentine’s at 8:00pm Thursday night. At first I attempted to knit some little heart pillows. I found the perfect tutorial and had set about on the knitting, when I looked at the clock, realized it was 9:00pm now, and saw that I was only about a quarter of the way through Valentine #1. 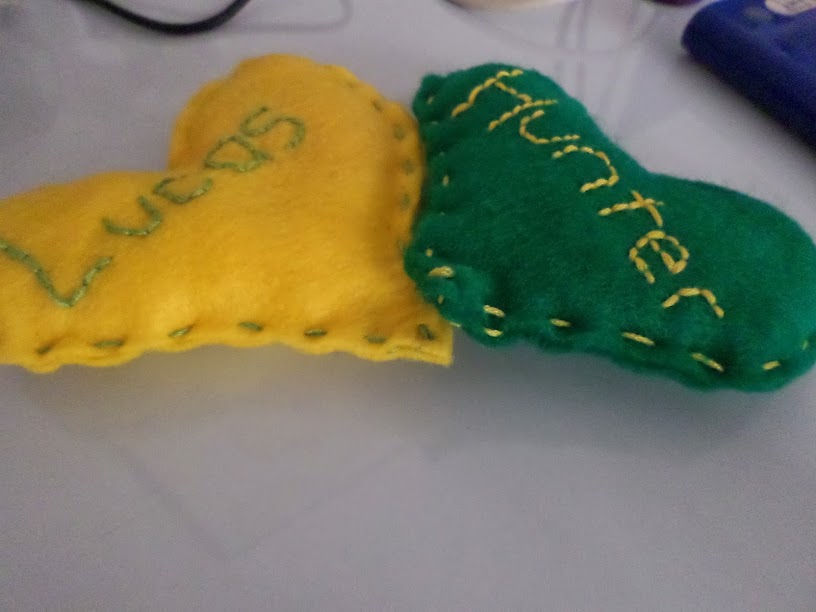 Change of plans, and quick. I don’t have much in the way of craft supplies just lying around. Sure, I could draw up some cards in no time, but these are for little people who are pre-reading and would really rather have something tangible. So I dug through my meager closet stash and found a piece of purple, a piece of yellow, and a large piece of green felt in my “leftovers” basket.

With just the felt, a pair of scissors, some embroidery thread, and a minuscule amount of supplemental yarn to add to the padding, I managed to whip up some cute little love pillows. 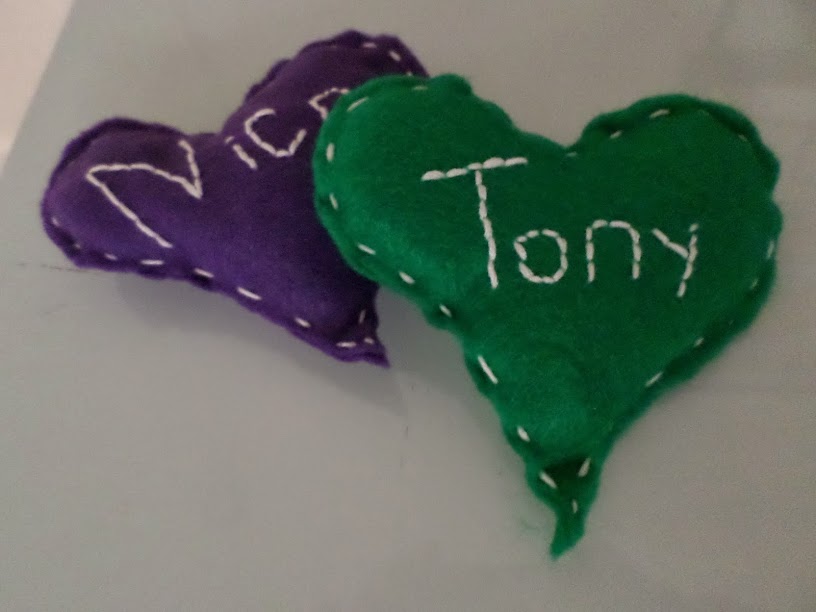 And that is it. You have a nice little gift to show your love and appreciation of a loved one in a very short amount of time. I think each of these took me around ten minutes from start to finish. It may take you more or less time depending on how proficient you are at sewing and embroidery, of course.

What kinds of gifts did you give for Valentine’s day?