In the midst of the many other projects I have going on, I needed to make some quick valentines for the kids I babysit. I originally was trying to make a couple things, but in the end it was taking too long and I just went with the smallest, fastest ones I had.

The oldest boy had found a beaded bracelet in a shop that he liked, but his mom wasn’t about to spend over $50 for a bracelet for a kid. I thought that was a little insane as well, so I decided to go back to another craft I had abandoned a while before and make him one. But what I make for one, I have to make for all. Luckily this was around the time I was thinking of valentines anyway.

I made one for each, with their initial in the middle. That way there will be no fighting over whose was whose. I had originally planned out the pattern, but then ended up messing up early on and created the rest of the pattern as I went along. Once I had one finished, I used it as a template for the rest.

Then, because I decided to give up on the second thing I was making (which will now likely become Easter presents), I was ready to make the cards at 10:00 at night. And I had no red paper. And I had been to the craft store earlier that day to get crimper beads…Anyway, I made the colored paper again and cut out hearts. Then I cut the spots for the bracelets wrong and ended up having to tape the bracelets in place in the back. That is what I get for doing this at bedtime the night before I needed to give some of them.

My grandmothers have birthdays about three weeks apart, so I was looking for something I could make each of them relatively quickly. When I told my mom we needed to go to the craft store to find something, she pulled a kit out that had been given to her. It had two pillowcases with hummingbirds on them. Perfect! 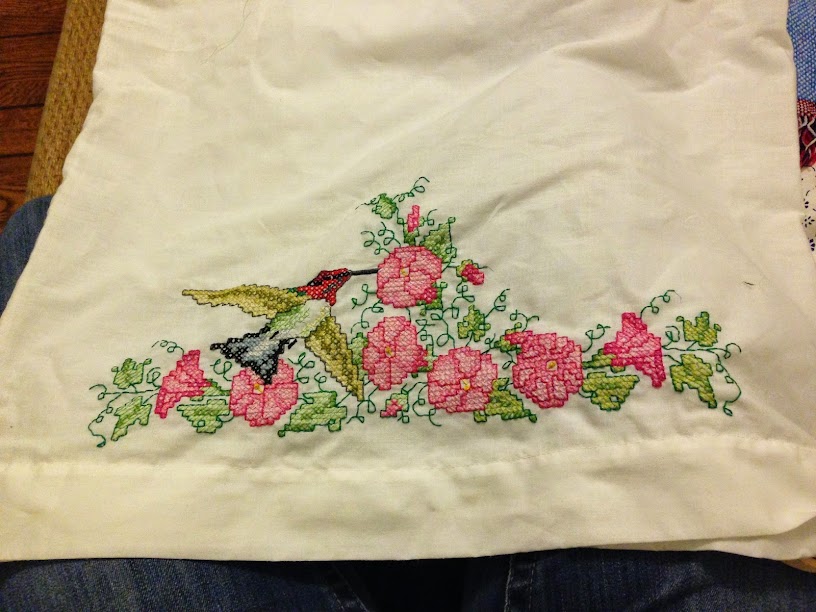 That one got sent out to my maternal grandmother a few days before her birthday. Took maybe two weeks to finish? I don’t really remember. But it was pretty fast, mostly because my mom had already started it. She did most of the light green before putting it down and forgetting about it a bit. 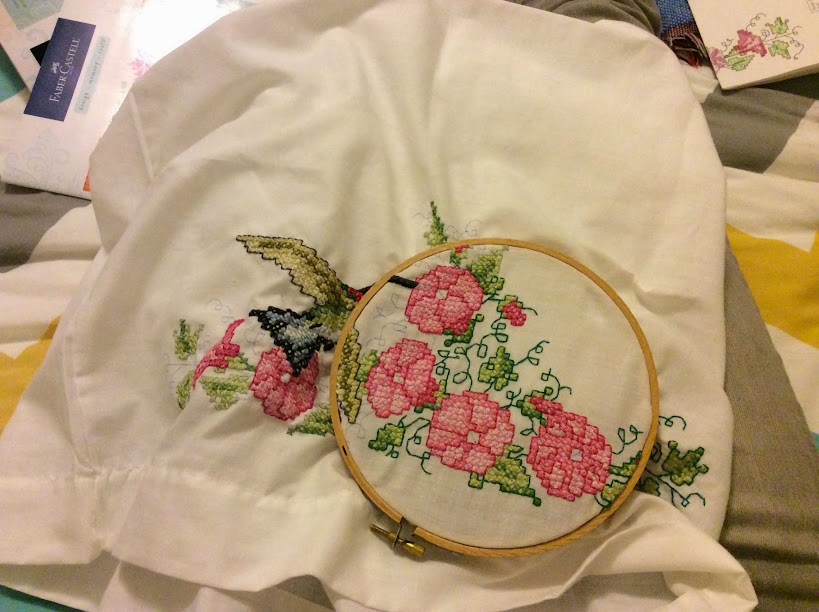 This is where I am with the one for my paternal grandmother. I’m plugging along pretty well. Too bad her birthday is less than a week away. If I’m really lucky I will get it sent Monday. But I’ve still got to finish the backstitch and french knots (grrr, french knots…) plus wash it and let it dry. I should also find a card…Better get back to work.