Spent the afternoon at the Notorious RBG exhibit at Skirball. Now to catch up on my #happylittleaccidents #stitchalong piece. #nofrogging #8bitstitch #crossstitch

I’ve been working lately on catching up on the Happy Little Stitch Along by 8 Bit Stitch (which is still going on if you want to join, highly recommended).

I started out keeping up really well, but as it’s gone along I ended up getting really far behind.

I think at some point I was about 4 clues behind.

Made a lot of progress with my #happylittleaccidents #nofrogging piece. Mostly because I stayed up until 2am working on it. Apparently just got in the zone last night. #8bitstitch #crosstitch

Didn’t help that I keep running out of colors that the store also runs out of at the same time.

But I’m almost caught up now, only 1 clue behind.

Getting close to almost halfway done with chart 7. Trying to make myself feel like I’m farther along than I am. #happylittleaccidents #happylittlestitchalong #nofrogging #8bitstitch #crossstitch

I’m giving myself lots of time to work on it this week because I just finished up producing two audiobooks.

Finally got to the store to get the colors I ran out of. Now I’ve got a big stretch to fill in with about three different colors. #happylittleaccidents #happylittlestitchalong #8bitstitch #crossstitch #nofrogging

Also, really excited to be done with the clouds for a bit.

They are really pretty and all, but it’s a lot of large swaths of single colors.

So I’m ready to move on to areas with more bits of more colors.

Basically, I have none. I have a ton of things I want to do, but I want to be able to get them done instantaneously and move on.

It’s why I’ve started my current cross stitch project four times now. I get tired of doing small bits of color and decide that I totally can count ten spaces out from my last stitch and put one in the right place. No, no I cannot. You would think I would stop making that mistake by the five thousandth time, but I’m pretty sure I’m on time six thousand sixty-three.

So, considering I am now on the last strip of this roll of fabric, I am going to use every last ounce of patience I can muster to take it slow. One patch at a time, never more than three spaces in a line or two diagonal spaces between the last stitches and the next. Let’s see how long that lasts.

So last week I ordered some fabric. It arrived the other day, and my little helper was very excited to help me open it. And then he asked, “Who is all those people?” Which lets me know I need to bust out the special episode tapes as we enter the holiday season.

Had a little help opening my package. "Who is all those guys?" #fabric #90snick #rugrats

I’ve drawn a quick flat, mostly to make sure it will look good to cut all the pieces on the bias, since it is quilting fabric and I want it to have some stretch. I like comfy clothes. I think it should turn out well:

Then, there is the issue of Halloween being a month away. One of the boys already has a Harry Potter costume, and now the other big brother has decided he also wants to be Harry Potter. The littles are a little more challenging. One wants to be a “vampire giant tarantula” and the other wants to be “mighty eagle from Angry Birds,” but I think I have those figured out. Just have to actually write a list of what I need to make them.

And, with Halloween only a month away, that means Inktober starts on Saturday. That is my 30 page notebook, which I have gouached the cover of to make 31 pages. Saturday will be creating a cover for it. I’m obviously going to be posting pictures to Instagram every day, but I’m also going to post a round-up here every Friday.

There is one more project that I am also working on. Actually, a few, but this is the first of a mini-series of Christmas presents. And, not meaning to cause panic to anyone making presents for Christmas, there are only 88 days left until Christmas. So I need to get moving on this. Or these. Not panicking. Yet. 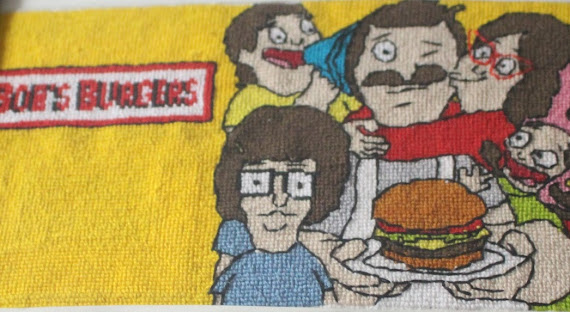 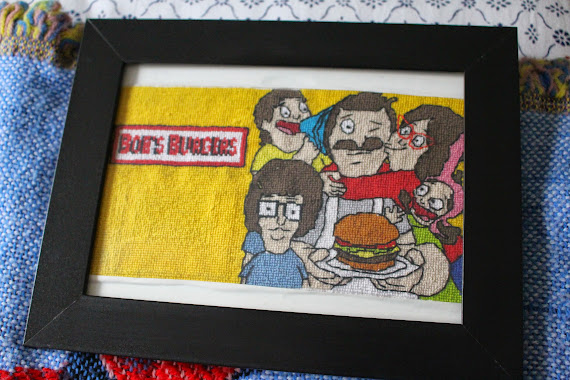 To be able to show you the finished Bob’s Burgers cross-stitch piece. Because it is actually finished this time. Unfortunately, I did not let my auto-backup run long enough last night and I do not have the finished picture.This is the most recent picture, from last Saturday:

I finished this Sunday, so there is about a week of progress missing. Plus a few days in between as I found out a minute ago as I was updating my Tumblr queue. Hopefully all of those things show back up when I run the backup again this afternoon. I swear I will post it on Thursday and move on. Because, trust me, I am more than ready to move on to the next thing. Even though I don’t quite know what that will be, yet.

They always joked it would happen when I was taking things like trigonometry and calculus in high school. I was going to get so used to working limits and imaginary numbers that I was going to have to write long, complicated equations across the walls of the school when someone asked me “2+2”. I don’t do any of that higher math now, but somehow I still cannot count correctly. Or maybe I can. I’m not sure. Because working on this particular piece, I am way off in some places and then miraculously get back on track within the next row. I have no clue what I am doing, but it is apparently evening out. I am also so ready to be done with this piece. Which is good, since I need to get it in the mail… oh, yesterday. Too bad I’m not actually anywhere close to being done. (Though I am much closer than I was in that picture.)

I’ve heard it said before that, “Slow progress is better than no progress.” Which is good in theory, but not so much in practice. If I were making no progress because I wasn’t doing anything, that would be understandable and not necessarily frustrating. It’s working for an hour straight and having almost nothing to show for it that gets irritating.

This was three days progress on the background. Closing that tiny hole took three days of work. Granted I only have a couple hours a day to work on this, but it is still disheartening to see it take so much time. Now that I’m on to the hair and skin, it feels like it is moving slightly faster. Only slightly, though. And I have to get this finished by next week to get it sent on time.