Or, the laziest DIY Friday to date. Because a button sewing tutorial wasn’t lazy enough.

I have been awake pretty much since yesterday morning. Because my brain likes to sabotage my sleep when I have to be awake early. I got a bit of sleep, but only in 30 minute spurts. I know because I woke up and checked the clock about every half hour last night.

I’ve also been slightly busy this week working on computer things in the afternoon and so I didn’t make the thing I’ve been somewhat planning to make this week.

I did make a coaster yesterday, but technically it is a swatch for a secret project so I can’t tell much about it. I can say I made it using Wool of the Andes Superwash that I got from KnitPicks when they were offering a free ball to try a few months back. The colorway is Noble Heather.

Here is the DIY portion of today’s ramble:

Very simple, no? I’ve decided I need to make a couple coasters to have around my room since I have a coffee maker next to the end of my bed. It makes it easy when I have to get up 30 minutes earlier than normal after having slept exactly none the night before.

To some, it may be a simple concept to replace buttons on bedding or clothes when they break or fall off. Others will use the item until all buttons are gone, and still others will pass on an item when it’s lost even one button. This afternoon I replaced all 12 buttons (some broken, some still fine, and some completely non-existent) on the bottom of the duvet cover on my bed. I could have just replaced the four missing buttons and waited until the rest of the buttons fall off, but I decided it would be better to have all the buttons matching.

Because it’s how I spent my afternoon and I want to get a little more practice at writing tutorials like this, I’m going to show you my method for replacing buttons.

First, you have to remove the old, broken, button. Simplest way is just to cut the string right between the button and the fabric:

Next, thread a needle and tie a knot in the end of the thread. Then place the button where you want it to go and bring the needle up from behind through one hole of the button:

If the old button pulled through the fabric and left a hole, it may be helpful to put the needle back through the knot to secure the button the first time going to the back of the fabric:

Once you’ve gone through each of the holes three to four times, tie a knot at the back and you are finished. 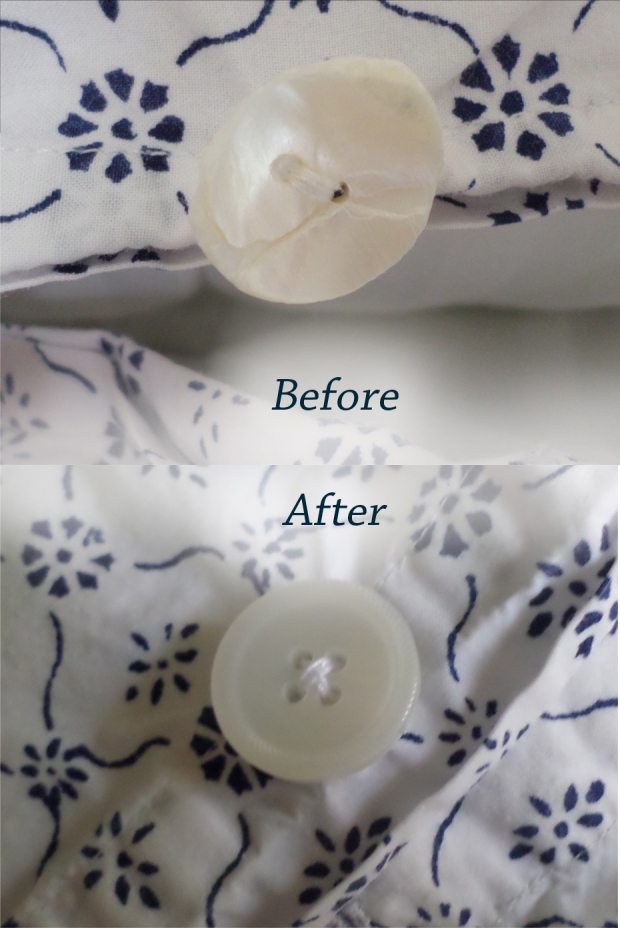 Hopefully this is helpful. Let me know if anything is unclear. Also, what do you repair instead of giving or throwing away that others might just get rid of?

Bonus tip: Make sure you have fairly sturdy needles before sewing. It’s never a good thing to break a needle while you are hand sewing. 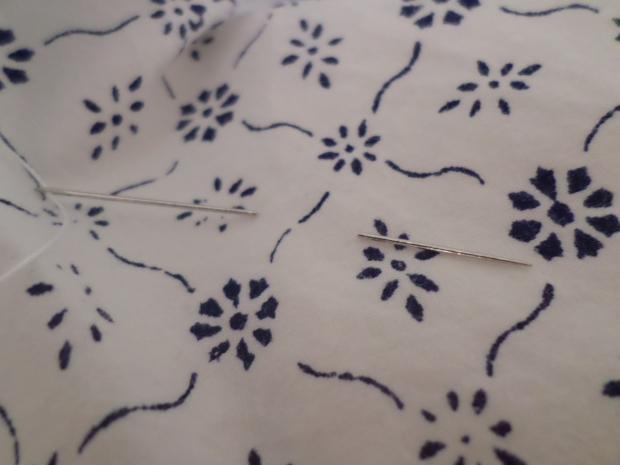 In fact, that was the first time I have ever broken a needle that wasn’t attached to a sewing machine. 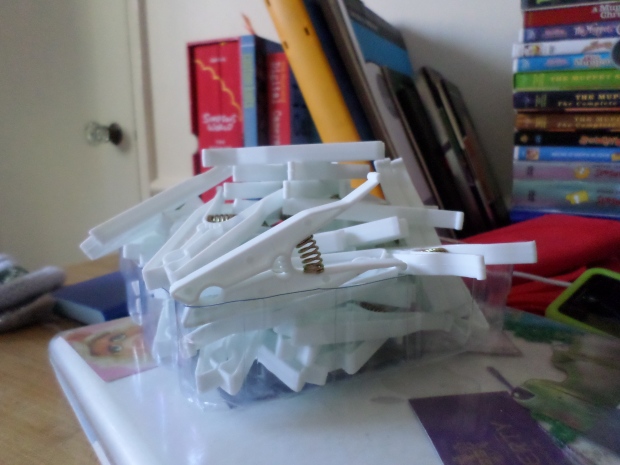 That’s what I had on my hands after using my new clothespins for the first time. They had been packed so nice and neatly in their plastic tray, and then I just didn’t feel like trying to stack them all back up.

Easiest solution? Throw them in a bag. Only problem was, I didn’t have a bag like that lying around. So I made one. 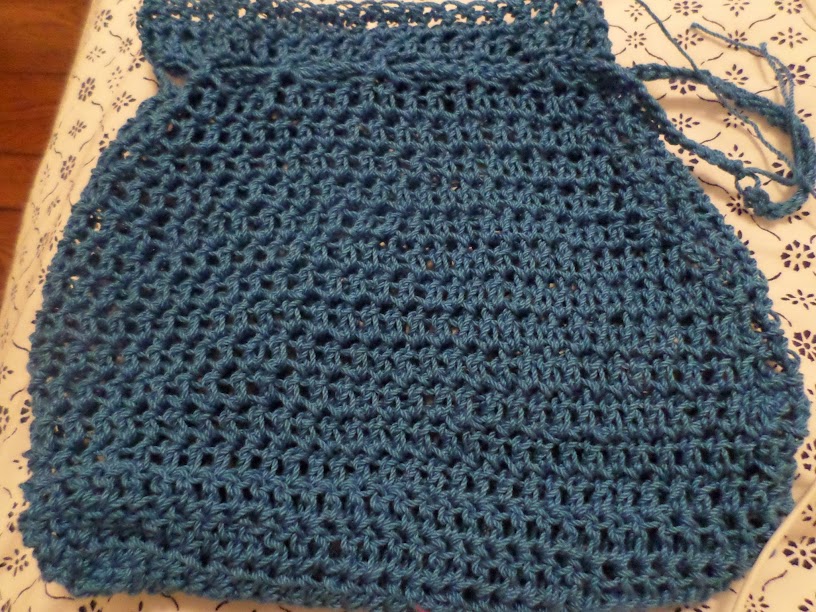 Basic instructions (I didn’t write down anything as I was doing it, so very minimal instructions) are on the Ravelry project page. It has a drawstring closure 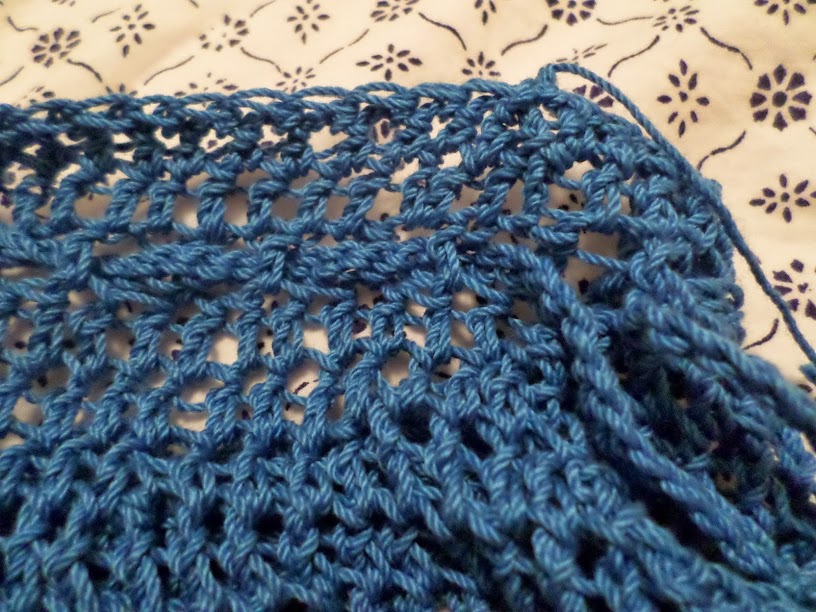 and sits pretty well when it is full. 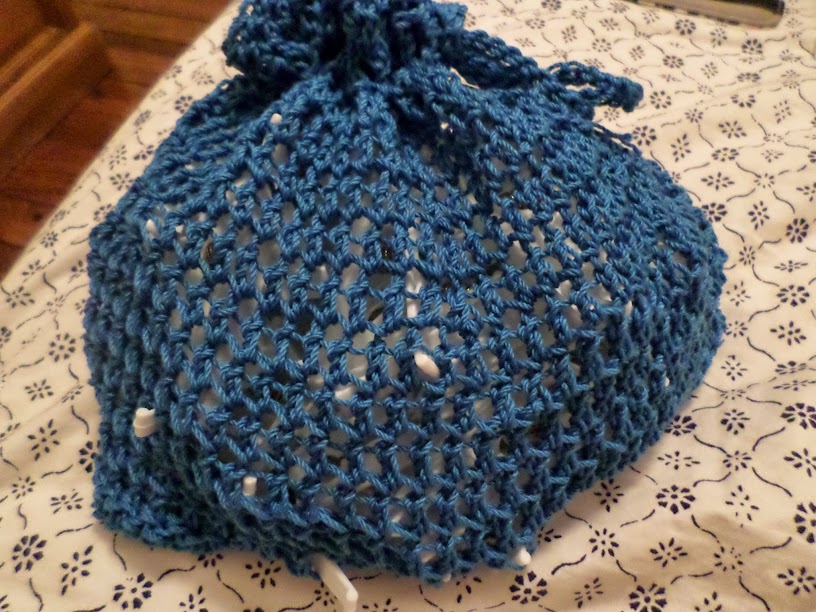 It was actually a pretty easy project to figure out in an afternoon, so hopefully my vague instructions aren’t too confusing.