Doodle bookmarks so I can stop using old paper yarn bands to keep my place in my library books. #drawing #zendoodles

I recently finished this page of doodles that I wanted to turn into some bookmarks for the stacks of books I’ve been ordering at a time from the library. I’m trying to get through my “to read” list on Goodreads, yet it keeps growing instead of shrinking.

Experimenting. Although, it just looks like a regular painting so far. #painting

Doodling got me wanting to do some painting, but not just regular painting. That’s where the experiments started. I began with this painting, but quickly decided I wasn’t going to be able to cover the pencil lines any time soon, so I abandoned that canvas and started another.

Ready for the next step. Let’s hope this works. #painting

The bottom layer worked out pretty well, though a little sloppier than I would’ve liked. But that wasn’t going to matter if my idea worked out.

Spoiler alert, it didn’t. I was going to try punch needle on the painted canvas, but it didn’t work out the way I had hoped. It’s ok, though. That’s the point of experimenting. And now I have a couple canvases that I can dismantle and turn into something else. Super excited to do more experimenting.

A while back I found some wooden animals at Target in the craft section. And by a while I’m pretty sure I mean a couple years because they don’t seem to sell them anymore. I intended to use them to make string art (you know, the kind where you hammer nails in all around and then wrap it with string), but I never got around to it and then lost interest in that idea.

A month or so ago I pulled them out again, intending to finally do something with them. My goal this year is going to be using up the canvases, yarn, and these type of wooden things I have to make space in my shelves. I was watching some of the progress videos from the Zenspire Designs Instagram and realized these little guys would be the perfect canvas for some doodling.

I’ve got a zoo painted. Well, two gorillas and a giraffe. But they are finished and posted in my #Etsy shop. Link in bio. #zentangleart

I started with one gorilla, to see if I liked how it looked, then decided to make the other gorilla face the opposite direction so they could look at each other. Or away from each other, if you want.

All three of these guys are available on my Etsy shop here. They would make an adorable addition to any nursery, playroom, or any animal lover’s book shelf.

I really liked how my umbrella picture turned out with drawing over the watercolor background, so I decided to do it again this week. And I went with candy because I’ve had a lot of it since Easter last week. Not this kind, but these are easier to depict in a line drawing than peanut butter eggs are.

Friday was favorite character day at the elementary school. Predictably, most of the people who dressed up were from the Harry Potter universe. You know, since it’s an elementary school and they weren’t allowed to dress as movie characters.

It started with a scarf, which actually came together rather quickly. I used red worsted weight yarn and yellow bulky weight yarn and was able to create a five foot long scarf with about 4 hours of work off and on Monday and Tuesday.

Then it was time to make the robe. I dyed some muslin black (that one took a couple different tries) and drafted the pattern on Wednesday so I would be able to sew it up on Thursday.

I then went and picked up some sunglasses to remove the lenses from. I wish I had remembered to take a before picture, because they started out bright, sparkly pink. But after a bit of sanding and paint they were much better.

Once everything else was together, I thought it could use one last touch, so I took some extra material from the robe, sketched out the Gryiffindor house crest with a white pencil, and embroidered it.

On the other side, I put a pocket. Not really a stylistic choice, but because part of the robe got eaten slightly by the serger.

I’ve mentioned before how June is a busy month for birthdays around here. Well, we have two of them. Now that I think about it, that describes every month March through June. Anyway, I decided to make t-shirts for both birthday boys. One asked me for a Baymax shirt and the other was having a cooking party so I made him a cupcake shirt. I used my contact paper masking method to create stnecils for some fabric spray paint. I made the basic picture using the paint, then added the details in a couple of different ways. For the cupcake shirt, I went back in with some embroidery thread to create outlines and details. The other one being a cartoon character, I thought drawn details would fit better with the style. For that I used my trusty Sharpie pens I found on my trip to the closing Office Depot.

They both turned out really well. Well enough to say definitively that the contact paper method really works for creating stencils for the spray paint. It just takes a lot of light coats of paint to prevent bleeding and pooling at the edges of the sticker. 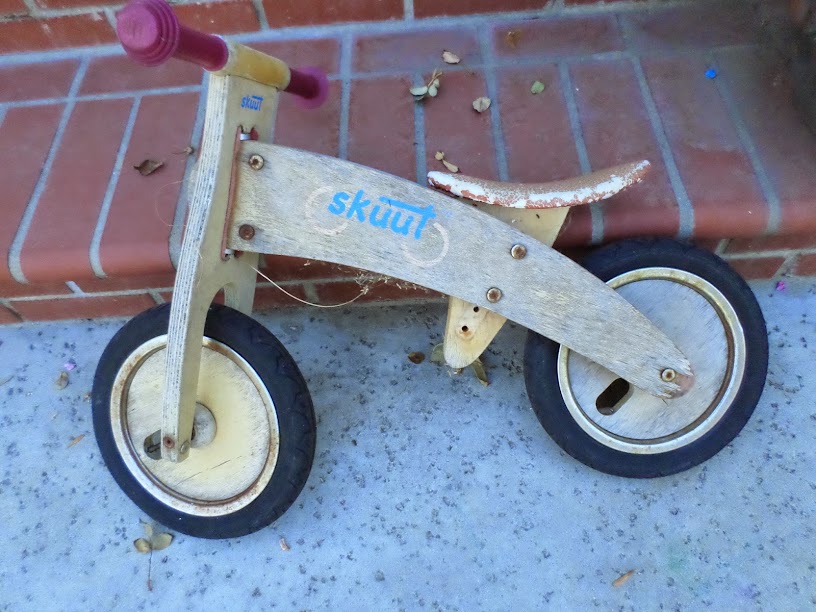 This bike started with the godparents’ oldest boy, then was handed down to the now-five-year-old who never really used it, and now has been passed to the just-yesterday-turned-two-year-old. It needed some love. So I took it apart, 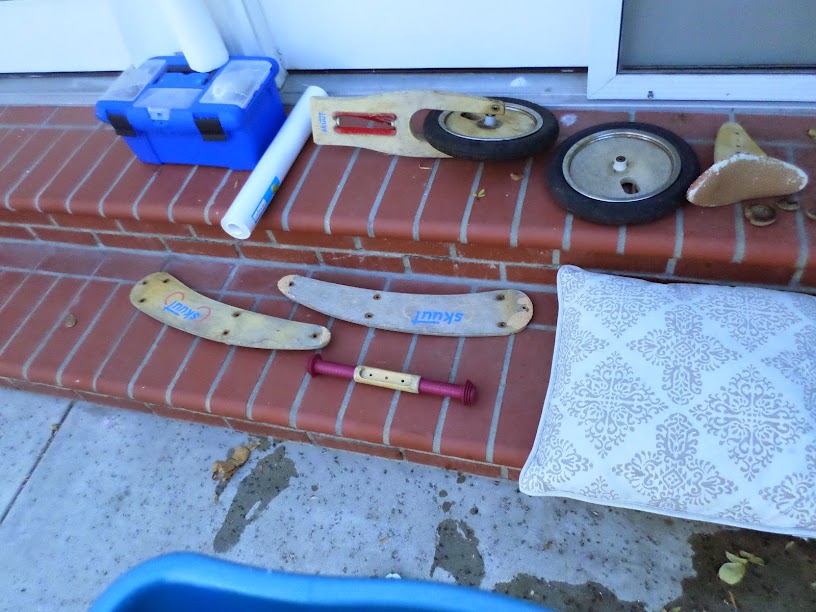 cleaned it up and gave it a nice coat of paint. Not to mention de-rusted the bolts. Some of those things were so rusted I couldn’t budge them without about half a can of WD-40. (Well, the generic version of it from Ace Hardware.)

Anyway, I asked the birthday boy what colors to paint it. His response was “lellow” and “geen”, so here’s what it looks like now: 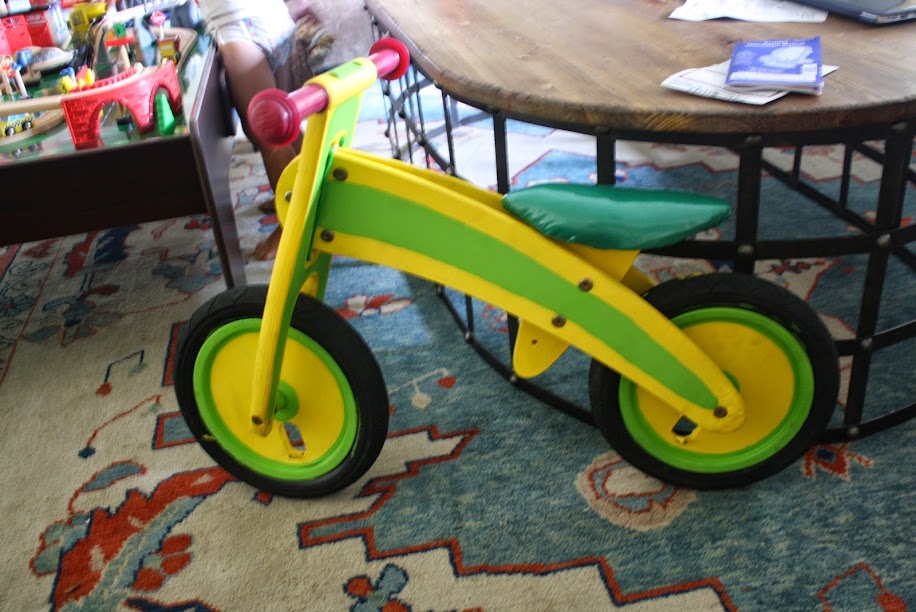 New, fluffy seat covered with weatherproofed cotton, clean bolts and sealed paint. Much more fun to get excited about riding than the old one.