I made my first starry stole for one of my grandmothers for Christmas. I was hoping to have two done by Christmas time, but like most of my plans to make presents that didn’t pan out.

I bought the Oregon coast colorway of Knit Picks Shadow thinking it would be a much lighter,more neutral color from the picture on the website.

I am actually very happy that it turned out darker than I expected. The color is similar to beach sand (hence the Oregon Coast name) with subtle rainbow-esque variations within the colors.

After making the first one, I decided that the rest of these (of which there will be four) should be a little longer than the pattern calls for. I did four repeats of the full chart rather than the three called for in the pattern. That gave it a bit extra length to be wrapped like a scarf:

or to actually be wrapped around the shoulders when worn as a shawl:

Unfortunately, this meant I needed more beads than I ended up with, due to quite a few beads that were unusable for the project. Either the holes were too small or they didn’t even have holes. Whatever the case, I had to improvise. Luckily, by doing both sides at once I was able to put the different beads directly in the center so they are all directly in the back and it won’t be noticeable. Though I did have some gold beads that made it less noticeable, anyway. 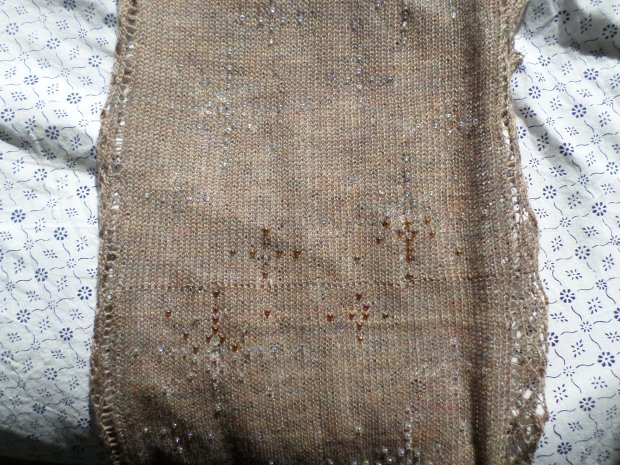 I really like the way it came out with the added length, so I am going to do that for the last two as well. Makes it easier to keep it on the shoulders.